THE DIFFERENCE BETWEEN INDICA AND SATIVA CANNABIS STRAINS

In the 1970s, cannabis branched into what was recognized as three subspecies, strains, namely Cannabis Indica, Cannabis Sativa and Ruderalis. The difference between Indica and Sativa plants is, visually Indica plants have wide leaves and remain short plants whereas Sativa plants are tall and have narrow and elongated leaves.
By OG Team

Upon researching cannabis and its’ history, you will learn that from the 1970s onwards, cannabis branched into what was recognized as three subspecies, namely Cannabis Indica, Cannabis Sativa and Ruderalis. The origins of marijuana over centuries have been traced back to approximate geographic locations, for example, Indica was found to mainly originate from the Hindu Kush region of the Middle East – Turkey, Morocco and Afghanistan, where they developed thick coats of resin as protection against the harsh environmental conditions. Sativa was found to be more commonly grown near the equator in areas such as Colombia, Mexico, Thailand, and Southeast Asia. In addition to differences in geographic origin, sativa and indica cannabis strains have several other differential characteristics:

Hybrids also exist and are the outcome of meticulous and careful cross-breeding, in fact, the majority of strains today are hybrids. Any hybrid crossed with Ruderalis becomes an Autoflowering plant/strain. An Autoflowering plant/strain provides an easy harvest of quality cannabis without the need for change in light cycles. You plug and play of strains that typically like 18 hours of light from beginning to end and take an average of 3 months to fully mature.

The difference between Indica and Sativa plants is, visually Indica plants have wide leaves and remain short plants whereas Sativa plants are tall and have narrow and elongated leaves. For this reason, Indica plants are usually grown indoors, and Sativa plants generally are grown outdoors. Both plants are commonly used in treating medical ailments and conditions, however, each strain has certain qualities that lend themselves to various ailments. In short, Indica strains are usually used for insomnia and anxiety, and Sativa strains have predominantly been used for fatigue, depression and other mood disorders. Both strains have proven to relieve symptoms such as pain relief, nausea, and loss of appetite; however, certain strains may relieve certain symptoms more efficiently.

Indicas are widely known to be more relaxing than Sativas; the effects of Indicas include:

Sativas are generally more stimulating than that of Indicas, and the Sativas effects include:

Please note that cannabis seeds cannot be planted in winter outdoors. The best time to plant feminized marijuana seeds outdoors is after spring with at least 14 hours of “increasing” sunlight. In South Arica from September to the end of November and auto-flowering seeds in late November.

Disclaimer: Overgrow aims to be a hub of information about medicinal cannabis strains. The views expressed in this article do not necessarily reflect those of Overgrow. 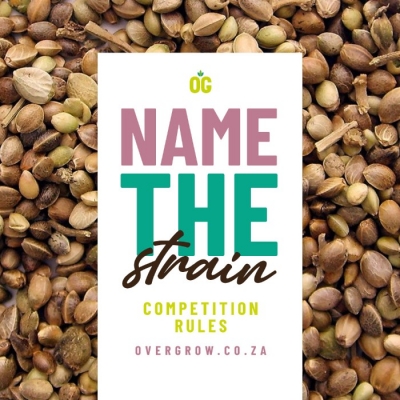 POWDERY MILDEW: HOW TO IDENTIFY, TREAT & PREVENT IT
5 METHODS TO CURE CANNABIS FOR FABULOUS FLAVOUR
HOW TO TRIM YOUR CANNABIS BUDS AT HARVEST